We’re living in a very interesting time. A lot of things are happening. Tesla is getting shape and disrupting the automotive market, as well as the energy market, very soon.

Google is getting very interested in robotics and machine learning.

Apple is heading towards an unseen one life with multi-device experience and ecosystem. Facebook is getting more people connected than any platform ever did before, … blah blah blah…

And I didn’t even mention Financial services moving to digital first and emerging digital currencies yet. In short, the internet is growing up at a tremendous speed we couldn’t even imagine. Why that is, I’m leaving that in the middle for now.

This is about something else. Something I’m noticing at every company I’m visiting as a consultant (to become their associate). This is about having a tremendous impact on a business by creating immense value.

The Common Situation At Compagnies

Lots of smaller compagnies are fighting to keep up.

There is a _huge_ opportunity for digital agencies and freelance consultants to be a part of this and deliver impact even bigger that they ever could have imagined.

Let me explain why, how and what.

How It Often Starts

Most of the times, the team gets stuck due to a lack of skills or knowledge about a specific topic. So they buy there way into knowledge via a consultant or freelancer to get the job done. In most cases, the team want to learn how to do it themselves, so they’re winning two times. Two flies with one stone!

No problem there. The only challenge for an agency or freelancer is to get paid for value instead of hours of work. That’s the hardest part to explain to your clients.

Why pay me for something it took me 10 minutes to create? (draw/write/whatever). This is why. pic.twitter.com/8mafTDV9z5

As a consultant or freelancer focusing on what you do, you’ll probably be better at spotting opportunities than others. You’re used to it. You’ve done this before.

Most of the times, you’re hired to do a specific task but you’ll come to a conclusion, about 99% of the time, that there is a bigger problem the team didn’t see. You’ll need to take a step back and look at the overview of the project. Change the scope a little bit. Making the team aware of that other, bigger opportunity (you don’t say problem, because your client doesn’t accept/want to hear he has a problem, although he knows he has one).

This is the moment where you’ll be questioning a few things:

That last bullet is the most risky one to question.
It has to be done. You have to confront your client with this in order to create the biggest impact on the project you can achieve. You _have to_! It’s your duty to talk about this triangle of Agility!

The Triangle Of Agility

It doesn’t matter if your project is building a product or doing marketing or something else. These three points are the most crucial items to tackle at any given company, for any given project. 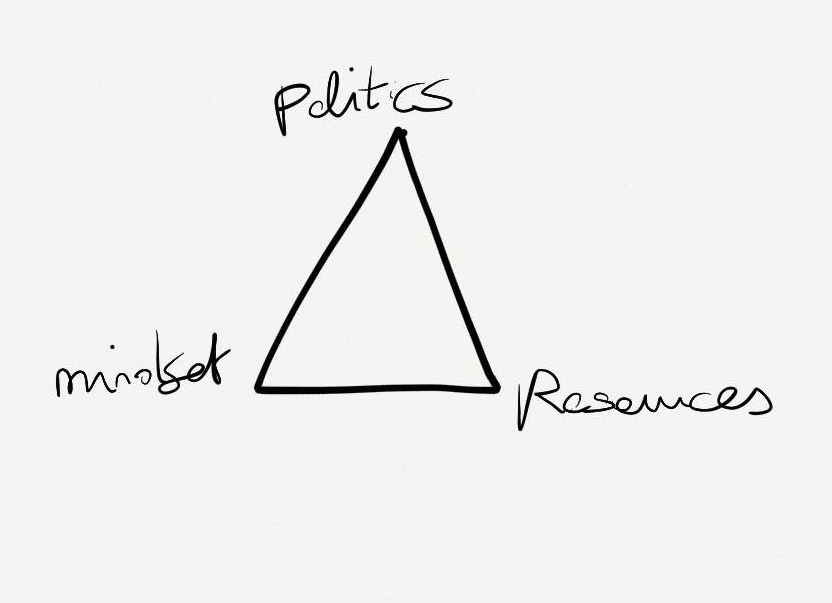 If you pull a triangle, the other corners will follow in that direction.
Meaning, you’ll need to find a balance in order to keep your business agile.

With agility, I actually mean adaptability.

Politics in a company are a real pain in the ass. If the hierarchy is big, you’ll probably get stuck on approval at many levels. The sad thing about complex internal structures is that those filled in management titles are having a big proportion of ego to handle. Up and down, left and right. Doesn’t matter. Politics kill vibes, willingness to achieve things and simply suck. Unless there is a small department that can act on its own. That would be great.

With politics comes responsibility. There is a big difference in taking responsibility and acting like your taking your responsibility. For instance, marketing manager that stick there neck out and try to do what is best for the company, will be the bad guy if politics are complex.

Mindset is one of the biggest problems. Out of the type of mindset (closest to type of culture) that lives in a company, evolves the internal structure and political hierarchy.

Let’s say you have a flat structure. So your team is entitled to make decisions on its own, act on its own with the help of one profile that still takes the lead. A marketing manager for instance. The only thing that can keep him from helping others to do great things, are those people themselves.

If their mindset is lagging, you’ll need to change it into a lean mindset.
Push forward. Don’t look back. Test and try things. Break things.
That is a _huge_ factor in a succes of a project!

It’s an attitude you need to cherish in your team.
Think big, different and move as fast as you can.

Resources can be translated in three items:

Time is the most essential part, in _any_ business!

Don’t have time? Buy time at a third party
Don’t have the right team? Hire extra people or Buy your way in into knowledge (digital agencies)
Don’t have any budget? I’m sorry, you’re on your own.

The funny thing about having a small amount of budget is that there is a solution. Bootstrapping. The even more funnier part is that the idea and tactics of bootstrapping comes close to the mindset of leaning forward. Which brings us back at learn your team to have the right mindset. The mindset will be flourishing if the internal structure is flexible enough of the department. If the whole company’s mindset is focused on a lean approach, structures will be flat as can be.

So… you need to find a balance in between.

Being agile is all about the right structure, the right mindset and the right resources.